The voyage of USRC Thetis – April to September 1884

We’ve been running the beta-test of oldWeather Arctic for several weeks now, and we’ve accumulated plenty of completed log pages – that’s log pages that have been transcribed by the three people we need to get reliable results. So it’s time to have a good look at the results we’re getting: Is our new interface collecting the transcriptions properly, and are the transcriptions we’re getting accurate and useful?

This time I’ve tried to show explicitly the link between what we’re doing on the website and the numbers that are going to the science team. The image below shows this for a single log page from USRC Thetis (click on the image for a bigger version). 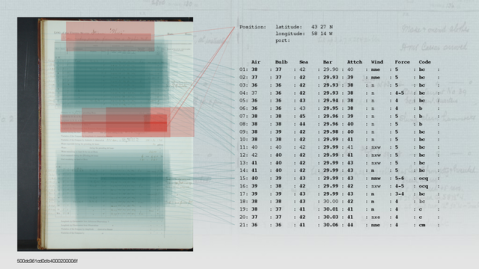 The log page for USRC Thetis from May 5th 1884 – as transcribed through oldweather.org. The coloured boxes overlain on the log page are those drawn by the transcribers (blue for weather, red for locations, and grey for dates). The text on the right hand side shows the information collected from the transcriptions.
(Bigger image, Video showing all pages.)

The left hand side of the image shows what we’re doing on oldweather.org – a log page marked-up with the locations of valuable data. (This time I’ve looked only at the dates, positions, and hourly weather observations – the historical events and informal weather records (including ice observations) are just as important but I didn’t have space for them.) As each page is transcribed by at least three people, there are usually three selections for each record. The right hand side shows the values extracted from the transcriptions.

For this page it’s working very well: we’re getting the detailed weather and ship-position information we need. Of course, that’s just one page – we need to do that for every page, and that’s shown in this video, which shows the transcribed data streaming out of the log consistently and accurately. All our hard work transcribing is delivering the detailed weather records the scientists need.

We can also look at the 2718 new weather observations we’ve rescued from the Thetis so far. How do they compare with more recent observations? Were the sailors on this ship careful and accurate observers? To judge this I like to compare the oldWeather observations (red points in the figure below) with modern records. 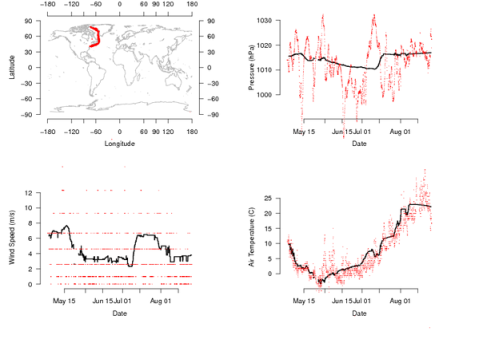 Observations made by USRC Thetis on her voyage from New York to Smith Sound in summer 1884 (red dots), compared with modern climatologies (black lines).

The top left image shows the route of the ship: from New York up through the Labrador Sea and Baffin Bay and back – a true Arctic voyage. The bottom right image shows that measured air temperatures were typically lower on the voyage in 1884 than the average (climatology) for the last few years – an intriguing result (though there are many possible reasons for it). Top right and bottom left are air pressure and wind speed, these are harder to compare because for pressure and wind we expect bigger differences between an observation (a point value) and a climatology (an average over several years). Rather than going into details I’ll just say that I’m very pleased with these results too; this comparison is exactly what we’d expect from good-quality, useful observations.

So well done USRC Thetis and all who sail with her – both her original crew who took the observations, and the oldweather crew led by Lekiam, Jelliott8 and lollia paolina.