I was on a research ship in the Arctic Ocean for two weeks this Summer and I’m working hard to get reoriented with current activity on Old Weather.

Among the most interesting things we brought back from this cruise are recordings of “the devil’s symphony” of unearthly sounds created by the movement of the Arctic ice pack. You will undoubtedly read about these sounds in some of the logbooks. Here is a typical description from In the Lena Delta by George Melville, chief engineer of the USS Jeannette:

It was in one of these oppressive intervals succeeding a gale, when the roar and crash of distant masses could be distinctly heard, that the floe in which the Jeannette was imbedded began splitting in all directions. The placid and almost level surface of the ice suddenly heaved and swelled into great hills, buzzing and wheezing dolefully. Giant blocks pitched and rolled as though controlled by invisible hands, and vast compressing bodies shrieked a shrill and horrible song that curdled the blood. On came the frozen waves, nearer and nearer. Seams ran and rattled across them with a thundering boom, while silent and awestruck we watched their terrible progress.

The recordings in this video “Winter Sounds of Arctic Sea Ice” video were captured last winter by hydrophones deployed in the Bering Strait by Dr. Kate Stafford of the University of Washington’s Applied Physics Laboratory. The undersea instrument moorings were located just north of the Diomede Islands (marked on the satellite image of the Bering Strait region below). 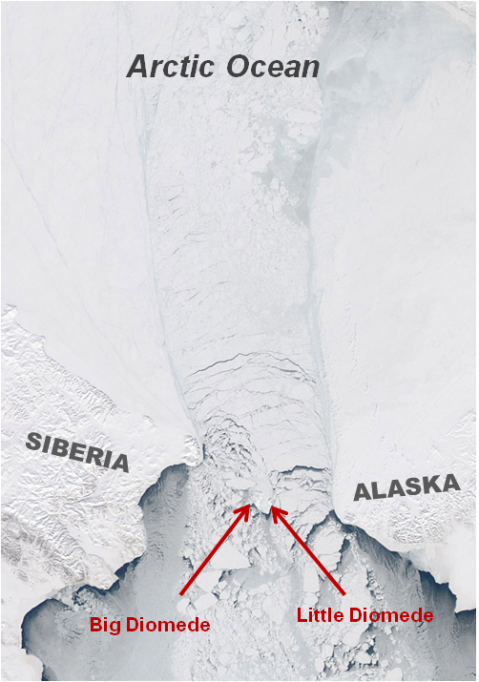 Looking at this example it is easy to imagine how these sounds might be produced. Just days before this image was retrieved on April 2nd, 2012, the ice pack north of Bering Strait was apparently one solid mass. In the course of a single day this long channel of moving ice formed and began marching to the southward into the Bering Sea, crashing into the Diomede Islands along the way. (You can also see how the northerly winds are opening the ice along the southern coasts, and some cool cloud streets forming over the relatively warm water of Norton Sound).

I look forward to getting back up to speed. Already our team at the U.S. National Archives is readying a new shipment of logbook images. These will be coming here to the Pacific Marine Environmental Laboratory for pre-processing (cropping, color balancing and other adjustments) before we transfer them to Zooniverse to get tee’d up for Old Weather.