To use the weather records in the OldWeather logbooks, we need to know not only what the observed temperature and pressure were and the date and time of the observation, but also the position of the ship at the time the observation was made (its latitude and longitude).

We are collecting quite a bit of position information in the logs: if the ship is in port, we get the port name; if at sea, the latitude and longitude at noon (and sometimes at 8am and 8pm as well). From this information it’s relatively straightforward to estimate the ship position at any time of the day (we just draw a line between the noon positions and use positions along this line). But, as with all the data we collect, this doesn’t give us exact positions – any of various problems might cause the positions to be inaccurate, and in using the observations we have to make allowances for these inaccuracies.

The first two of these will produce big errors in the positions (chosing the wrong Devonport is close to being the biggest error possible), so they are serious, but also easy to spot. These are a nuisance (because we have to correct them), but hardly ever a problem. The last three points are hard to correct, and do introduce modest errors in the observations positions.

The figure shows the noon positions of HMS Pegasus on her Voyage from Plymouth to Arkhangelsk and back to Dundee in 1919 – ably digitised by captain Uldis Ohaks, lieutenants Manock and elizabeth, and their crew. 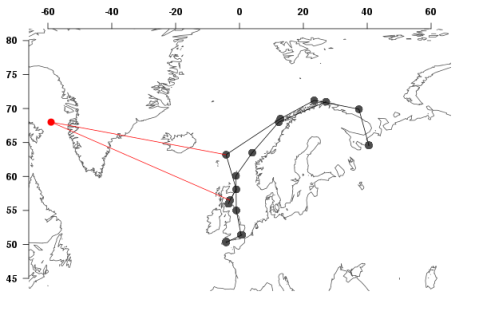 One position is clearly in error – the visit to Baffin Bay (marked in red) is impossible. Checking the log page for that day shows that, most unusually, both the latitude and longitude of this point are wrong. The longitude has been incorrectly captured by our system as 59 degrees west, while it is actually 59 minutes (i.e. 1 degree) west. We have correctly captured the latitude given in the log (68 degrees north) but this must be an error in the log, because that page also refers to sighting landmarks in Orkney and Caithness, so the ship must be around 10 degrees south of this. We have to guess the actual position, and, in this case it seems likely that the ship was actually at 58 degrees north, and the entry in the log is a typo.

The other positions clearly don’t contain big errors, but it’s clear that the ship didn’t always travel in a straight line between her noon positions – the lines linking them on the map often cross land, in England, northern Norway, and the Kola Penninsula. In these cases, the actual midnight position of the ship is probably about 100 miles from the straight-line-guess.

It’s tempting to fix these problems: we could improve our ship position estimates noticeably by using more sophisticated methods of tracking them. For example, the logs often contain hourly course and speed information, so it would be possible to digitise this and make hourly position estimates by dead reckoning; when within sight of land the logs often contain bearings to points on shore, which could also, in principle, be used to derive a more precise route for the ship. So we could certainly do better (at the cost of a great deal of work) but we’ll never have perfect information on the ship positions, so it’s worth asking first, how precisely we need to know them.

The weather shows itself both in very local effects (showers, contrails, frost hollows) and in very big effects (such as the drought, and now flooding, in Australia). A good illustration of this is the excellent Oldweather authors poster – if you wanted to paint this image you’d need a large brush for North Africa and the tropical oceans, and a very small brush to capture the fine detail. We can capture this detail with modern satellites, but to do the same from ship observations we’d need millions of ships, densely packed over all the oceans – an obvious impossibility. So when doing historical weather reconstructions from ship data we have to forget about the small-scale effects, but it’s still really important to get the large-scale effects correct. Throw away the small brush, and concentrate on using the big one to best effect.

It turns out that the combination of the number of weather observations we can collect, the accuracy of their pressure and temperature measurement, and the power of the computers available to us, mean that we can’t reconstruct weather effects at smaller scales than about 200 miles. (For the Oldweather period – we can do better in the present day). And that’s with the new observations we’re producing; without them in many areas we can’t reconstruct the weather at all.

This means that, in practice, a ship position error of a few 10s of miles is not a big problem, and doing all the work necessary to get more precise positions would hardly help us at all. It’s much more useful to spend our effort on entering more data, and that’s what we’re doing.

So if your ship seems to have taken the M1 (road) out of London instead of the more conventional choice of using the Thames and North Sea, don’t worry – the observations are still useful. Unauthorised excursions to Greenland, Baffin Bay, and other far-flung locations are unacceptable, however, and will have to be corrected.

One response to “A local habitation”